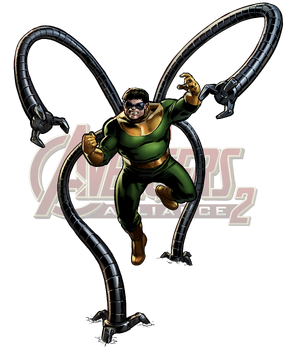 "After a radiation explosion caused four mechanical arms to fuse yo his body, nuclear physicist Otto Octavius turned to a life of crime to prove his genius to the world. Telepathically operating the arms with lethal acuity, "Doc Ock's" egomania is rivaled only by his spite for the wall-crawling Spider-Man".

Note: These are his stats at Level 9

"Having eight limbs grants Doctor Octopus ample oppurtunities for counterattacks. As he analyzes the fight with his genius intellect, his Accuracy increases and his strikes do more and more damage".

Retrieved from "https://avengersalliance2.fandom.com/wiki/Doctor_Octopus?oldid=9527"
Community content is available under CC-BY-SA unless otherwise noted.