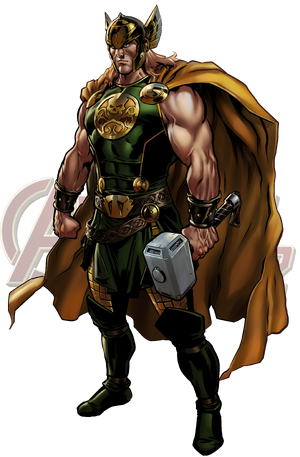 "With an EMP-generating, tech-based hammer, and substantial genetic enhancements to his strength, Hammer is the heavy hitter of Hydra's Super Agents, and the opposite (if not the equal) of the Asgardian, Thor. Militant, Tactical Force, Bowman, and Hammer currently use the team-name "The Hydra Four."

"As a copy of Thor, its unsurprising that Hammer echoes his behavior in combat, piling on a weakness to Shock attacks while simultaneously delivering them. If his godlike delusions are allowed to persist, he also grows Strengthened and Focused."

Retrieved from "https://avengersalliance2.fandom.com/wiki/Hammer?oldid=9659"
Community content is available under CC-BY-SA unless otherwise noted.