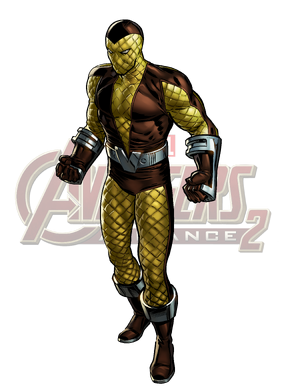 "Herman Schultz is a small-time burglar turned Super Villain. Equipped with a sonic absorption suit that dampens attacks, and a pair of vibrational gauntlets that can generate condensed waves of sound, Shocker has frequently been a headache for street-level heroes like Spider-Man".

Note: These are his stats at Level 8

"With the ability to send shockwaves through air, Shocker doesn't really worry about people hiding from him. As he propels himself around the battlefield, his abilities weaken his opponents' Evasion and Attack and leave them shaking with Wounded".

Retrieved from "https://avengersalliance2.fandom.com/wiki/Shocker?oldid=9522"
Community content is available under CC-BY-SA unless otherwise noted.