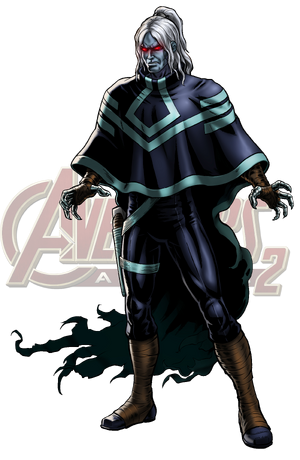 The son of a rogue Kree scientist, Zak-Del became bounty hunter and cosmic mercenary in defiance of the Empire. Infected with an extraterrestrial parasite, 'Wraith' as he now call himself, possesses a powerful healing factor and an immunity to pain. He arms himself with a polymorphic weapon of unknown origin.

"Empowered by the Exolon parasite, Wraith is able to turn a simple guard stance into regenerative action. Once recovered, he lashes out with his polymorphic weapon, causing Wounded more often than not."

Retrieved from "https://avengersalliance2.fandom.com/wiki/Wraith?oldid=9686"
Community content is available under CC-BY-SA unless otherwise noted.